Free Tour Cadiz to know the Plaza of Spain

The Plaza de España in Cadiz (The Spanish Square), located in the northeast of the Old Town, welcomes tourists offering a large urban space laden with history and green spaces where tourists can find relaxation within the City.

Delimited by the historical and traditional center of Cadiz, and the bay, the Plaza de España de Cádiz is the ideal place to take some fantastic photographs due to the great lighting offered by the southern Spanish climate.

In addition, the place has many corners ladened with history and symbology of both Cadiz and Spain.

The history of the Plaza de España in Cadiz is closely linked to the demolition of the wall that existed in front of it, giving rise to an old inner square.

Therefore, the disappearance of the old wall that existed in front of the door of San Carlos, gaving rise to the current Plaza de España in Cadiz in the year 1915.

The demolition of the city walls in the port area at the beginnig of the twentieth century allowed the creation of this large garden area. It was completed in 1929, coinciding with the inauguration of the Memorial to the Constitution of 1812.

The buildings that surround it are good examples of the evolution of the civil architecture of the city of CADIZ during the eighteenth century. From the baroque houses of the four and five towers to the elegant academic design of the Provincial Council building or the district of San Carlos. 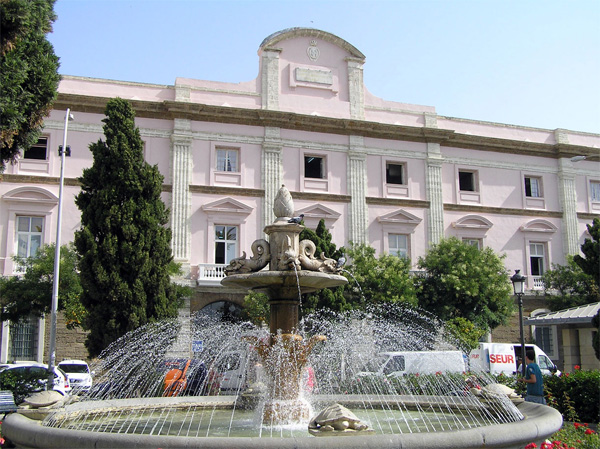 Located on the urban edge that surrounds the Bay of Cadiz, this square in a significantly rectangular way was previously near the first coastline to the bay. Today the new constructions that have been gaining ground to the sea have made it lost this character.

It is a green space, because it is composed of gardens with concentric and radial walks, with all its interior space divided into large parterres with paths that converge towards the center.

The place where one of the most emblematic monuments of the city of Cadiz stands: the monument to the Courts of 1812.

The care and cleanliness of the Plaza de España in Cadiz is latent in all of its corners.

In this square you can see some sculptures that commemorate illustrious personas, as well as numerous fountains where the doves stop to quench the thirst.

It also has numerous plant species that make for wonderful photographs. It can be seen along the entire surface of the Plaza de España in Cadiz.

There are numerous plant species of interest that can be seen in the park, both shade and the wonderful “Chorisia” or “Drunk stick”that can be seen before the House of the five towers of Cadiz .

Points of interest of the Plaza de España of Cádiz.

Previously we spoke roughly about the Plaza de España in Cadiz. Now we will detail the main points of interest that can be visited.

It would take more than a century before the idea became a reality, and the opportunity to celebrate the first centenary of the Constitution when the construction arose.

Modesto Lopez Otero chose the design, with sculptures of marine Aniceto. The monument is conceived as a large semicircle, with a great triumphal pillar that rises to the sky of the capital of Cadiz in the center.

All its iconography is thought in memory and rememberance to the work of the Parliament of Cadiz. In the middle of the semicircle, the tourist can find a throne with the coats of arms of the Bourbons that symbolizes the LEGITIMACY of Ferdinand VII.

On both sides of the central pillar are the groups of sculptures of citizens marching towards war and the fruits of peace. The figure of Hercules representing the city of Cadiz in the back completes the monument.

Finally, the monument is concluded with other iconographic elements and inscriptions reminiscent of the parliamentarians and the role that America played in the historical event.

In the mid 18th century and after the destruction of the walls that ranged from the Bastion of San Felipe to the Sea Gate, three large buildings were set up with identical public ends and close to each other: the Customs, the House of the Recruitment, and the Consulate.

At the time of the city’s maximum economic splendor is when this construction took life. During the monopoly of the trade with the American colonies by the transfer in 1717 of the Casa de la Contratación from the City of Seville.

Besides all this, the project was benefited thanks to the fact that the city that had a defensive system of walls and bastions already consolidated, and experienced a great demographic growth and social welfare.

The Customs Palace was designed and lead by the military engineer Juan Caballero around 1764, giving beginnings to the works a year later and ending in the year 1770.

House of the five towers.

The House of the five Towers is formed as its name indicates, with a total of five different houses with their respective towers, lined up consecutively, which overlook one of the fronts of the Plaza de España in Cadiz.

It is therefore five different houses erected on a large block. They were built around the year 1771 and are Baroque in style, transitioning to neoclassical.

Despite being made up of five independent houses, as a whole they form a homogeneous compound with similar characteristics. Each house consists of four floors, a small inner courtyard and the tower. The bodies of the walls are separated. Except on the ground floor that is made up of windows, the upper floors of the houses are composed of balconies and closed.

The peculiarity is that all the towers have the same shape, except for one.

The Plaza de España in Cadiz is a must visit if you come to the city. Both for its history and for its green spaces, it is an ideal place to stop and have a rest and take some good photographs.

Much of the history of the Spanish state is reflected by each of the corners of the square, from the buildings that surround it to the sculptures you can find inside.

And without a doubt, any tourist can not leave without photographing the monument to the courts of 1812, in honor of the mother of all the constitutions that later took place in the Spanish justice.