Free Walking Tour with visit the Alameda Apodaca in Cadiz

There are many reasons to visit the Alameda Apodaca of Cádiz as it is one of the most visited places in the city of Cadiz. A place to stop and take beautiful pictures or just to have a rest after a long walk.

The name of Alameda Apodaca dates back to the year 1856 in honor of the Admiral of Cadiz Juan José Ruiz of Apodaca and Eliza.

It is a beautiful corner adorned with flowers and trees. Ideal for a walk and to find shade on hot days. Moreover, its geographical location is in a place known for storms.

It is one of the obligatory places to visit if you come to Cadiz, since the Alameda is included In the Gardens of Cultural interest located in Cadiz . 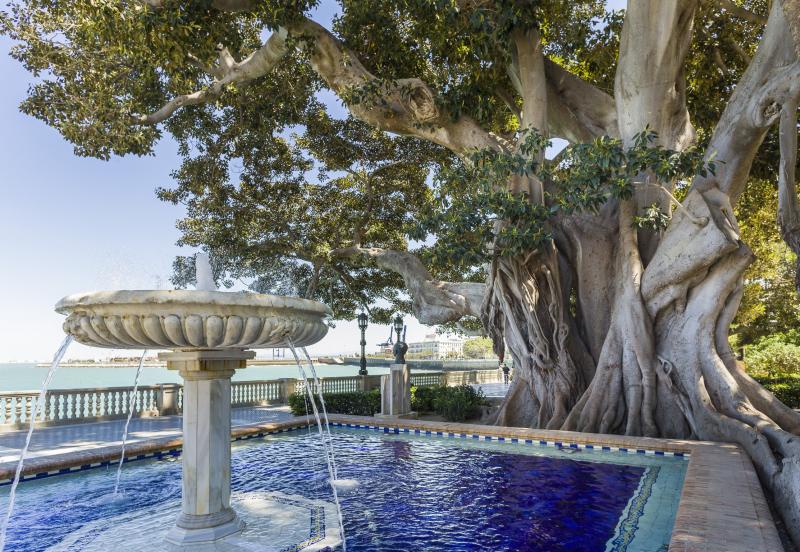 Where is the Alameda Apodaca de Cádiz?

It is located northeast of Cadiz’s Old Town. It is a walk that due to its location does not receive all the force of the storms, placed on the walls that overlook the Bay of Cadiz. Since the 17th century, it´s been one of the most popular places in the city.

To be more exact, it is a garden walk in the historic old town of Cadiz, which runs parallel to the sea and the city wall from east to west.

It begins in the walls of San Carlos and ends between the Bastion of Candelaria and the Church of Carmen.

Throughout its history it has been reformed several times. Although the one that gives you the look that you can currently visit was made in the year 1927. It was designed by the architect Juan Talavera and Heredia.

It is made up of flowerbeds adorned with a wide variety of trees and plants. In whose central area is the monument to the Marquis de Comillas.

Style and decoration of the Alameda Apodaca de Cádiz.

Due to its history and antiquity, the Alameda Apodaca de Cádiz consists of a eclético style of regionalism. Emphasizing the ordination of a varied succession of halls decorated with ceramics Sevillanas. In addition there are elements of forging that do not prevent us from the views of the sea.

It is an ideal place to take pictures with the Bay of Cadiz in the background. Although if you are looking for a something really magical, it is advisable to visit the Alameda Apodaca of Cádiz in the evening. It is when the lanterns are arranged to give a magical touch.

It is one of the places that, in terms of decoration, is more well-known within the city of Cadiz.

You´ll find endless trees on your walk. Which are interspersed with stone columns. The large number of trees and plants make walking a pleasure on sunny days. Since the vegetation is lush providing some satisfactory shade.

During the spring months, the whole road is colorful thanks to the flowers that can be found and photographed there.

In one of its halls you can find a monument in honor of the Marquis de Comillas, which was made in the year 1919 by Antonio Parea and Laurina.

The monument is topped with a graceful winged Vitoria, resting on a high pillar. The base of the monument is decorated with sculptures and reliefs. 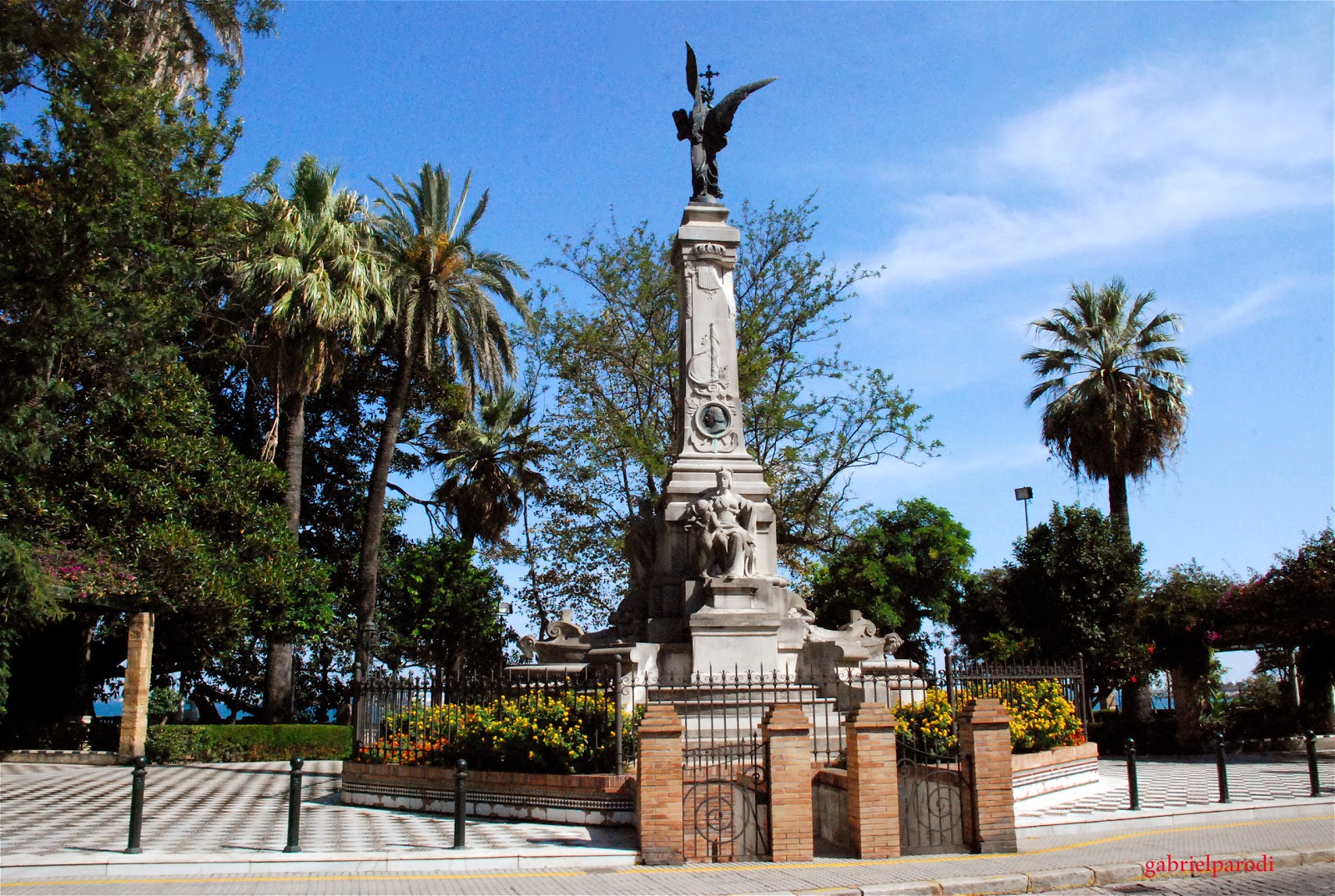 Who was the Marquis of Comillas?

Sir Claudio López Bru (1853 – 1925), the Marquis of Comillas. He was a Spanish entrepreneur and philanthropist who was characterized by his most radical ideology of traditionalist conservatism.

He played a key role in the Spanish- American War, where he stood out for his patriotism. He was fundamental in certain export campaigns between Spain and America.

Well, to be exact the first stone of the monument was placed on October 9, the year 1919. Thanks to the result of a popular event to which both Spaniards and Americans attended.

The history of the Alameda Apodaca in Cadiz.

The first walk which was much broader than the current one  which was created in the year 1617. Then a promenade was formed with three streets divided by rows of trees, between the year 1750 and 1754.

In the year 1836, it was divided into three parts. The high room, the medium with a narrower area and the living room, becoming a garden area.

Although the aspect that it currently has if you want to visit the Alameda Apodaca of Cádiz, was not finished until the year 1927 by the regionalist architect Juan Talavera and Heredia.

The same architect also designed the Gardens Walls in Seville. In Cadiz, he made a transformed  the Alameda to turn it into a Sevillian style garden and according to the aesthetics that dominated at the time of the Ibero-American Exhibition.

What species of trees and plants are seen in Alameda Apodaca.

What is most striking without a doubt of the Alameda is its lush and colorful vegetation. Parterres are delimited with plants called Toyas, on the sides closest to the city, while those facing the wall are plants called ligustrum lucidum.

The adjoining area between the promenade and the avenue is planted with deciduous trees. These trees are fundamentally banana. While there are other more striking species in the area near the sea. Among which are two large specimens of Ficus.

These Ficus were planted at the beginning of the twentieth century, hence their antiquity, and came from Australia. In addition to these ficus you can also find a Cherimoya.

We recommend visiting the Alameda Apodaca of Cadiz because it is a location that invites relaxation.

You can have a rest in any of the balconies that overlook the sea. In addition you can walk along the entire route admiring the flowers and trees.

Be sure to take wonderful photographs in order to have a beautiful souvenir of the city of Cadiz. Striking photography all thanks to the light and colours that can be found in the area.

An open space, you can visit the Alameda Apodaca of Cádiz with children. You can have a fantastic day as you walk and admire the scenery. All while learning about the history of the oldest city in the west. For more information do not hesitate to contact Cadizfornia Tours. We offer free walking tours in Cadiz for the whole family without cost.